Trench family of Richmond Hill
Main Menu → Next Panel
Early settlers
Panels
Early settlersWilliam Trench IIIServing communityServing community (cont.)Margaret Trench and her childrenMargaret Jane TrenchNancy and Robert TrenchMatilda and Beatrice TrenchSara and George Trench
The Trench family were of Scottish lineage and came originally from Dunbar on the East coast, but some of the members of the family lived for a few years in Leith just prior to migration to Upper Canada. The men came out first about the time of the rebellion in 1837, and the marriage of Mathew Trench is recorded in the register of Rev. Wm. Jenkins of Richmond Hill in July of 1838. George Trench also appears as a witness to a marriage on New Years Day, 1840. The rest of the family, including the women and children, came to York: County early in 1842.

The senior member of the family in Canada was William Trench, who died on January 8, 1855, and is buried in Richmond Hill Cemetery, the first of four generations to be buried there. His wife had previously died in Scotland. At least four of his children were born in Canada with him, but only one son also named William lived for any length of time in Richmond Hill. The complete record of the descendants of the others is not available, but some of them are known to have settled in various parts of York County and around Listowel, Ontario.

William Trench, the second of the line, brought his wife and six children to Canada in 1842. They had a stormy passage and were 17 weeks on the ocean. During the voyage their seventh child, Beatrice, was born, and two more were born after their arrival in this country. They first settled at Elgin Mills, and lived in a house that is still standing (in 1951) the second house north of the sideroad on the West side of Yonge Street. William and his father were both blacksmiths and operated a blacksmith shop there for many years. William died about 1877 and is buried in Richmond Hill cemetery, but the record on his tombstone is unfortunately lost. His wife Sarah W. Craik, died on April 10, 1876.

Their nine children are: William, Margaret, Jeannie, Nancy, Robert and Matilda, all born in Scotland between 1831 and 1841; Beatrice born on the high seas; and Sarah and George, born in this country. The following is an account of them and their descendants. 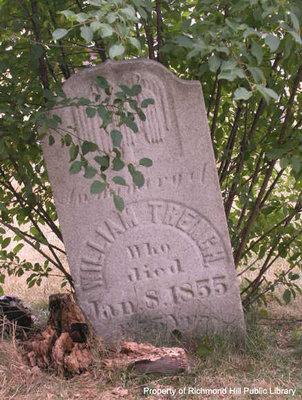