John Atkinson, the founder of the Atkinson family in the “Home District” of the County of York in Upper Canada, was born in Yorkshire, England, in the year 1764. When he came to this country in 1819 with the tide of immigration which followed the war of 1812, the total population of the townships of Vaughan and Markham numbered less than 2,600, but even this meagre total was nine times greater than it had been at the turn of the century, a scant 20 years before, when there were but 203 men, women and children in Markham and 103 in Vaughan.

In the possession of one branch of the family is an old family Bible printed in ancient type and brought from their old home. In it is recorded the bare details of the early history of this pioneer family. The first entry reads: “I, John Atkinson emigrated from Yorkshire to Upper Canada with part of my family, namely Thomas and George, Margery and Jane, in the year of our Lord 1819, my two sons John and David being come two years before to the United States and my son William came to Upper Canada four years after me”.

Other entries in the Bible reveal that John Atkinson’s wife, Margery had died in England in 1807 at the age of 41; and that his family of seven ranged in age from the mid-teens to the late twenties, when they arrived in Upper Canada in 1819. They settled in Vaughan Township where the family operated successfully the old mill on Mill Road, a mile south of the present village of Richmond Hill.

Among the 852 marriages recorded in the diary of the Reverend William Jenkins of Markham, who has been described as the "Pioneer among pioneer ministers of the Presbyterian denomination in Canada” (Records of Ont. Hist. Soc., vol. 27) appear the following which pertain to members of the family of John Atkinson:

On March 19, 1821, Margery married James Marsh, whose family had come to Canada in 1802, and later settled on the farm which is now the site of the David Dunlap Observatory. On August 7, 1821, John Jr. married Elizabeth daughter of Michael Kurtz, (or Corts or Curts; the name is variously spelled) who had brought his family from Pennsylvania in 1799 to take advantage of the offers of land made to United Empire Loyalists by the government at that time. Then, on January 3, 1822, Thomas married Lenissa Holland. Almost four years later, on Christmas eve 1825, George married Margaret Baker, and finally on November 8, 1820, Jane married Robert Mortly. There is no record of the marriages of either David or William (if indeed they married) although David signed with his brother John as a witness at the marriage of his sister Margery to James Marsh. George Atkinson died in 1832 just before his thirtieth birthday, and three years later his widow married William Basingthwaite (or according to Mr. Jenkin's spelling, Basingtwit). Regretfully the writers of this article know no further details of the families of either George or Thomas Atkinson.

John Atkinson Sr. died on October 21, 1835, in his 71st year, and in all probability was buried, along with his son George, in a private plot on his farm, as was often the custom in those days. His eldest son John Jr. continued the mill business on the old Mill Road. The latter was a staunch friend and supporter of William Lyon McKenzie in the stormy days of 1837. He died on December 1, 1849, in his 60th year, and is buried in Richmond Hill cemetery. The mill was kept in operation until the business was crippled through losses incurred by shipment of wheat to the British Porces in the Crimean War in 1854-56. The widow then purchased a home on the south side of Centre St. West, in the village of Richmond Hill – Lot 34 on the old map. Here she dwelt until her death on May 17, 1865, in her 73rd year. 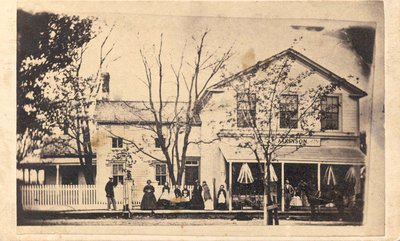