William Harrison, local historian, recalls in his writings of July 30, 1908, the 60th anniversary of the historic tragedy, the Kinnear murder, which took place near Richmond Hill in 1843.

He begins his story, “It may not therefore be out of place though late in my life’s history, to give a plain, and I trust, an unassuming account of this terrible tragedy in a rural home.

Authors living far from the scene and its surroundings have written on this tragic event and to make their efforts more attractive to their readers have drawn on lively imagination until to a minimum of fact they have supplied a maximum of fiction. The object of this sketch will be to endeavour to present the event as it occurred and the characteristics of the parties concerned in its history as they were understood by those living at the time.

Perhaps it will be as well to premise that the writer’s father and his family came to this locality in the spring of 1842 and settled about two miles north of Richmond Hill on a farm nearly opposite the Kinnear estate, Yonge Street, only between us. As neighbors we were on friendly terms and daily intercourse. At the time a lad of nine years of age the faces of the murders and their unfortunate victims were all familiar to me.

Captain Kinnear who purchased the farm in the township of Vaughan on account of the country air, and country surroundings, was a gentleman of reputed wealth, of aristocratic bearing, pleasant and kind to all around him. This, however, did not prevent him from looking well after his own, for the writer has often seen the Captain standing under his verandah, with a spy-glass to his eye, watching us boys (a part of the juvenile depravity of that day) to see if we were trespassing in a small orchard he owned just south of ours.

Hannah Montgomery, known to us as “Nancy”, Mr. Kinnear’s housekeeper, was of medium height, a well built, happy-tempered woman, who was always cheerful and very neighborly. When water failed at her house, she would often come to our home for a supply. On one occasion without the least idea of his compliance, Nancy jokingly bantered our hired man, Joe, to give her a lift across the road, then knee deep in mud. Without the least hesitation Joe, who was a modern Hercules in build and in strength, took her up on one of his brawny arms, her full pail in the other hand, carried them across Yonge St., and set her down at her master’s gate. Nancy thanked him and went home laughing.

McDermot was a man of very different temperament. He was morose and churlish. There was very little to admire in his character. Of his earlier history, very little is known, save that he came of respectable parents, had been a wild and restless youth, had joined the army in the old country, had deserted his regiment, escaped and came as an emigrant to Canada.

McDermot was a smart young fellow, so lithe that he would run along the top of a zig-zag fence like a squirrel, or leap over a five barred gate, rather than open or climb it. Had he not made himself so conspicuous a figure in the calendar of crime, he might have been prominent in an Athletic Association. He enlisted in Captain Kinnear's domestic service as stable boy. Through his own efforts he was subsequently promoted by the Government to a more established position.

Of McDermot's moral standing among us, there is but little to say. Perhaps his best-known characteristic was his utter disregard for the truth. Of Grace Marks, the last comer to the Kinnear home, McDermot’s companion in crime, but little was known. She was there only a few months, a girl of about 18 years of age, an immigrant from Ireland. She was engaged as housework assistant to Nancy Montgomery. Grace was of a lively disposition and pleasant manners and may have been an object of jealousy to Nancy. Over Grace, McDermot seemed to have had a baneful influence from the first week of her arrive at the Kinnear homestead. There is plenty of room for the supposition that instead of her being the instigator and promoter for the terrible deeds committed, she was but his unfortunate dupe in the whole dreadful business. There certainly did not appear to be anything in the girl’s personality that would be likely to develop into an embodiment of concentrated iniquity that McDermot tried to make her out to have been, if he ever uttered on half of the statements attributed to him in his confession. His disregard for truth was well-known. Like Topsy of a later date he thought it his duty to “fess something,” so in the hope of saving his own neck, he fessed much that never happened to which writers of fertile imagination, pandering to the public taste for exciting literature have added conversations between the guilty pair that bear the impress of incredibility from beginning to end. 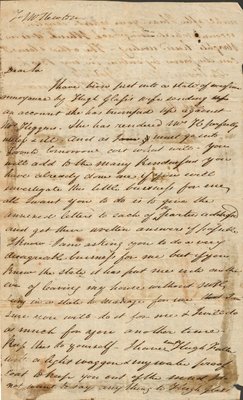