I am told St. Mary’s Church of Richmond Hill, was built in 1872. The land was given by the late John Arnold of the Hermitage and his wife was asked to name the new church. She chose “St. Mary’s.” The first marriage in the church was of their daughter, Miss Blanche Arnold, and I heard it said of her recently, “she was the most beautiful bride I ever saw walk down an aisle.” But time is no respector of persons and within the last few years she and Dr. Evansham have both been laid in the family plot reserved by the Arnolds.

It was necessary to build St. Mary’s as Dr. Duncomb’s Church had been burned. I never heard that the old doctor posed as any saint; but he certainly must have been able to sing with a clear conscience, “We love the place, oh God, Wherein Thine Honour dwells;” as he had built a brick church himself, evidently the first Church of England in Richmond Hill.

The late John Sanderson told me the doctor got the collection for keeping on the fires, etc. I don’t know where the parson came in. He had the Clergy Reserve Fund of something like $400 a year and came up from the Rectory at Thornhill. In Miss Campbell’s diary, references were found to the Rev. Robt. Shanklin being a musical genius, and this made her very anxious a- bout the music, where as a young lady, she began to play in the old church. He was also the first Rector of St. Mary’s and perhaps no Rector was ever loved more than Mr. Shanklin. If anything was lacking in the sermon on Sunday it was more than made up for by his Irish wit on Monday.

Some years later he was ordered to Florida for his health, and in tears the little flock at St. Mary’s bade him good-bye. In a letter to the warden, the late John Brown, he wrote, “We were so tired when we got here that we were ready to lie down and die.” Travelling in those days had none of the comforts of the present day. In a later letter which was saved as a keepsake ne wrote, “Others shall eat of the fruit and sit under the orange trees, which I have planted.” He was brought back but passed away in Toronto without returning to his home.

Then for many years the church had an uphill road. Some people thought it should be closed. Old records of the finances of the church at that time have sometimes caused a smile; but new comers did not realize that the church was kept up by only a handful of people. Sometimes there was a caretaker, sometimes there wasn’t. It was up to the church warden then. When the Rev. John Gibson, M. A., was Rector, 1899- 1912, Mr. Fury was warden. He frequently crossed the fields on Saturday with his bucksaw to lay the fire. On Sunday he was ready to take up the collection in military style.

Services were always at 3 p. m. except once a month when it was at 11 a. m. Occasionally, the lamps in the chandeliers were polished and filled with oil for a Thanksgiving service in the evening, or a Missionary meeting: which was a wonderful event.

There were often several excellent speakers and you were likely to be asked to take a parson home, so the “spare room” was heated and set in order. If you have been accustomed to going to church only once a Sunday perhaps the habit stays with you. In all churches these days the “Notices for the week” are so extensive that one would need to live at the church, like little Samuel in order to be able to attend them all. When people went once a day to church, in years gone by, the Bibles were out on Sunday in the home and were read.

The late John Brown was superintendent of the Sunday School and taught the big boys for many years. Mrs. J. K. Falconbridge taught the girls, and I must say she was the most wonderful teacher of Bible history that I have even known. As time went by there were other teachers. The spire was built by the men about the same time as the women decided to work for the pipe organ. The women succeeded and the organ was paid for, but I think the men owed $300 which was the only debt on St. Mary’s Church. A young Englishman, Mr. Sidney Marsh of Sheffield, placed the cheque on the plate one Christmas morning. Great credit is due to the Anglicans who built the church and paid for it so soon. Their names are worthy of mention, but space will not permit and I might miss someone.

A bell was given by the late Christopher Duncomb, nephew of the old army doctor, and still Loud in air, Calls men to prayer.

Old Father Time passed by and left empty seats in St. Mary’s but others came to fill their seats and many more. Yes, in many ways things have wonderfully improved and we are all thankful that they have. It is well known what a pretty little church we have, and I will leave the topic “Advancement” for someone else. 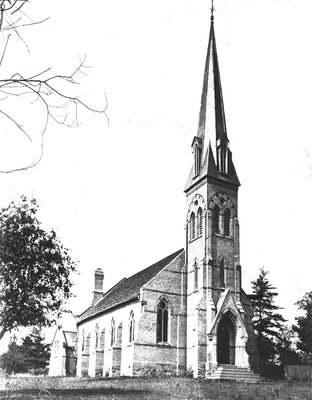