After four years as Principal of Richmond Hill Public School, he purchased "The Liberal" the weekly newspaper of Richmond Hill in 1882. This he continued to publish until his death in 1926.

In connection with the paper he also maintained a book and stationery store in the old building which was wrecked to make way for the very modern building occupied by the Richmond Theatre, and the offices and plant of the Liberal. Many generations of school children purchased their school books there.

He was greatly interested in the welfare of the village, and served as secretary of the Library 3oard for twenty years. 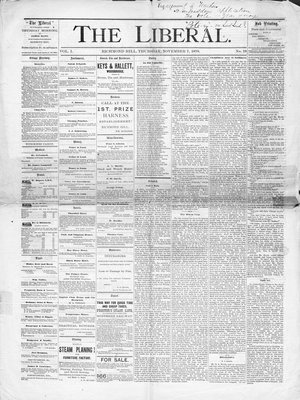