Biographical sketches of prominent residents of Richmond Hill
Main Menu → Previous Panel → Next Panel
Susannah Maxwell
Panels
Wright FamilyAmos WrightWilliam PowellSusannah MaxwellMatthew TeefyAlex J. HumeThomas McMahonWilliam TrenchDavid BoyleJohn CoulterThomas WilkieAbraham LawRobert MarshLeslie InnesWilliam HarrisonParker CrosbyJ. A. GreeneRussell LynettHelen and Frank HoggJerry Smith
There passed away on February 12th, 1922 in Richmond Hill, Canada’s oldest citizen, and one of the most picturesque figures in York County history, in the person of Mrs. Susannah Maxwell, aged 116 years. She was one of the oldest colored people, who reached a heaven in Canada before the emancipation of the slaves in the United States coming here via the underground.

Mrs. Maxwell was born in Lancaster County, Penn. On March 10, 1805 of free-born parentage. In 1861, when feeling over slavery ran high, she and her husband and family narrowly escaped being taken into slavery by kidnappers. They decided to seek safety in Canada, where they lived in Toronto for a short while before moving to Richmond Hill. Her husband and four of her five children passed away many years before her.

In Richmond Hill she lived in what was known as “The Brick Treatment” four attached houses on Yonge St. S. where now stands a fine residence, No. 103. Mrs. Maxwell lived in the reign of six British Monarchs: George III, William IV, George IV, Queen Victoria, Edward VII, and George V.

On the occasion of her one-hundred birthday the village gave a reception in her honour in the Presbyterian Church, where she was a member, and presented her with one hundred dollars.

Mrs. Maxwell’s daughter Tillie lived with her and they did laundry for many residents of the village who appreciated their excellent workmanship. 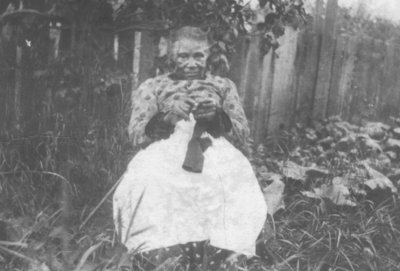