He emigrated to Canada in 1830, and settled on Yonge St. below Richmond Hill, working for Mr. Langstaff for a few years, then renting Colonel Moodie’s farm, Lot 49, Concession I, Markham for some time.

In 1835 he married Margaret, daughter of Colonel Bridgeford, and moved to the farm on Lot 47, Vaughan. He was married again in 1858, after his first wife died to Elizabeth Chamberlain, having in all twelve sons and three daughters from the two marriages.

Mr. Powell was a member of the first Council in Richmond Hill, and during the rebellion of 1837-38 a member of Captain Gapper’s Troop of Horse. 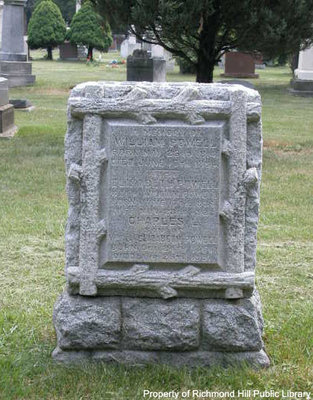