In early life interest Mr. Harrison took an interest in village affairs. In 1856 he assisted in the organization of the first village fire brigade, and was the first secretary-treasurer. In the same year he became a stock holder in a company organized to publish a paper in Richmond Hill, The York Riding Gazette. To it and its successors, he contributed letters and editorials. He also wrote a series of articles on early days in Richmond Hill and vicinity, which have been of the greatest help in the compiling if this history.

In the year 1866, Mr. Harrison formed the Richmond Hill Mechanics Institute, and Literary Society, with over 5000 volumes, the forerunner of our Public Library, in which some of the books still bear the frontispiece of the Mechanics Institute.

In 1873, he was most active in securing incorporation of Richmond Hill as a village, but refused nomination as reeve. However he was elected reeve in 1874, and during his term of office оbtained the monies to which the village was entitled under the Clergy Reserves and Municipal Loan Fund amounting to some $3,000.

Mr. Harrison was also active in Methodist church work. He was a charter member of the first Methodist Sunday School in 1848, and as a teacher and superintendent,aras connected with this Sunday School for fifty-one years.

"He is one of Richmond Hill's best citizens, and one greatly admired by all who know him". (Quotation from "The Commemorative Biographical Record of York County" published in 1907). 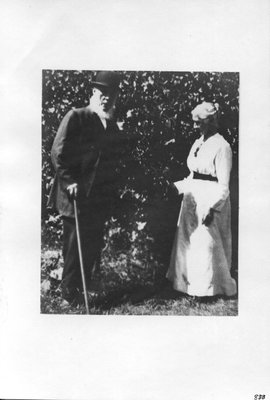