Biographical sketches of prominent residents of Richmond Hill
Main Menu → Previous Panel → Next Panel
Leslie Innes
Panels
Wright FamilyAmos WrightWilliam PowellSusannah MaxwellMatthew TeefyAlex J. HumeThomas McMahonWilliam TrenchDavid BoyleJohn CoulterThomas WilkieAbraham LawRobert MarshLeslie InnesWilliam HarrisonParker CrosbyJ. A. GreeneRussell LynettHelen and Frank HoggJerry Smith
Leslie Innes, born in Aberdeenshire, Scotland, in April 1828, came to Canada as a young man, and engaged in the building trade. In 1857 he married Miss Mary Ritchie of Thornhill where they lived until 1885 when they moved to Richmond Hill. Then the firm of L. Innes and son (William) was formed and they purchased the Dr. Langstaff lumber mill on the creek at the west end of Richmond Street. The old mill burned down soon after they purchased it, and they erected a new mill, combining a saw and planing mill which continued in operation until the year 1927, when failing timber supplies and water power forced the mill to close, the last of the many mills on the west branch of the Don river.

Mrs. Fred Bunce, nee Betty Innes, daughter of Harry Innes, who was the grandson of Leslie Innes, is the only remaining member of the family in Richmond Hill.

Carol Innes Proctor, daughter of John L. Innes, son of Leslie Innes, is widely known for her paintings and photography, especially of wild life and flowers. She lives at Kettleby, so is still in York County (1950). 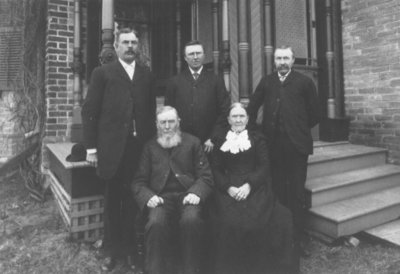