Biographical sketches of prominent residents of Richmond Hill
Main Menu → Previous Panel → Next Panel
Abraham Law
Panels
Wright FamilyAmos WrightWilliam PowellSusannah MaxwellMatthew TeefyAlex J. HumeThomas McMahonWilliam TrenchDavid BoyleJohn CoulterThomas WilkieAbraham LawRobert MarshLeslie InnesWilliam HarrisonParker CrosbyJ. A. GreeneRussell LynettHelen and Frank HoggJerry Smith
Mr. Abraham Law, first reeve of Richmond Hill, was born in Pennsylvania on October 13, 1806. At the age of 18 years he moved with his parents to Canada and settled near Stouffville. He came to Richmond Hill, at that time containing about 18 houses, in the year 1826, and purchased the land on the northwest corner of Yonge and Richmond streets in 1827.He built a house on it in 1832 of mud bricks nearly 18 inches thick (it was demolished in April 1952, to make way for a service station). lt is shown in the tintype in this book.

Mr. Law was for a number of years in business as a general merchant. He was a member of the Methodist Church, being one of the fifteen members of the first Methodist church in Richmond Hill. He donated the land on which the present United church stands, when the other church was destroyed by fire in 1879.

For many years he was Justice of the Peace, and in 1873 became the first reeve of Richmond Hill.

He married Elizabeth Klinck (Elizabeth street was named after her), and had thirteen children, two of whom resided in Richmond Hill for many years Mrs. P. L. Grant and Mrs. Amos Wright, who lived on the homestead. 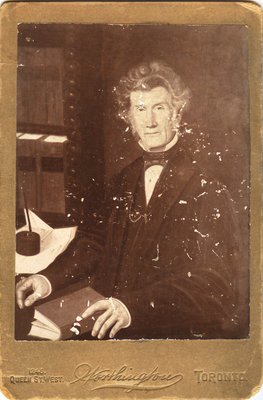