History of Yonge Street
Main Menu → Previous Panel
Buildings on Yonge Street
Panels
Early developmentsPublic TransportationThe growth of Yonge StreetBuildings on Yonge Street
Early houses were almost invariably of logs and usually larger than the required 16x20’. These were warm if well built, and could be neat if the logs were dressed on both sides, although this meant a higher assessment. Houses were assessed according to type of construction, number of fire places or stoves, and number of stories, rather than for size or cost. Most settlers were content with one fireplace and one storey and a loft or attic. This method of taxation discouraged the building of good houses, and as the second storey had to be of full height to raise the assessment, it accounts for the popularity of storey and a half houses in Ontario.

When war broke out in 1812, the demand for produce was so great the country could not begin to meet it, so price controls had to be imposed. The steady movement of naval supplies up Yonge St. brought Government gold to the farmers. By this time, a considerable amount of their land was cleared. All unfenced land was common pasture, on which cattle and swine grazed freely. As time went on new methods of farming were adopted. Wheat and flour were exported by 1845, and in the 1860's barley and rye, and by 1846 York had grown large enough to take all the meat and dairy products grown in York County.

The first school on Yonge St. was on lot 35, east side of Yonge at No.7 Highway. This was the original log house built by Balser Munshaw, in 1795 and lent by him for a school house in 1810. It was taught by John Langstaff.

In 1836 trustees were set up for the highways in the Home District (consisting of the Counties of York, Ontario, Peel and Simcoe), with powers to erect toll gates and collect tolls. There were two on Yonge St. in this area, one at Langstaff and one near Elgin Mills. In 1846 when the provincial government took back control of the roads, Yonge St. was macademized as far as Richmond Hill. That year the roads brought the Government £10,425 in tolls, and expenses were £300. In 1850 the roads were sold to a private company for £75,100 and the macadam road extended to Holland Landing.

The opening of Railroads in 1853, 55, and 56 reduced the tolls, and the County of York purchased the three roads, also the Lake Shore Road for $73,500. Tolls continued to be collected, the privilege going to the highest bidder, until 1896. By that time the minor roads were in good condition, and the traveller could avoid the gates. 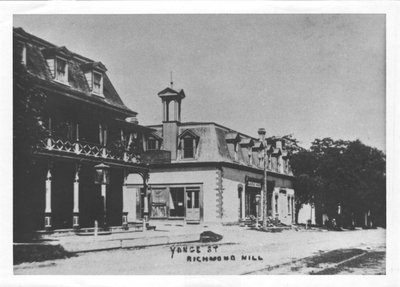 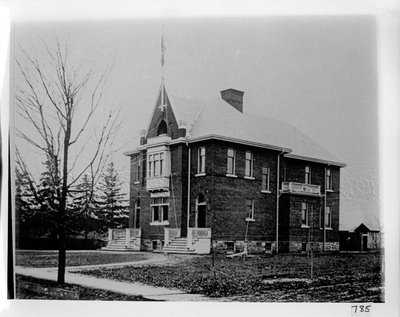 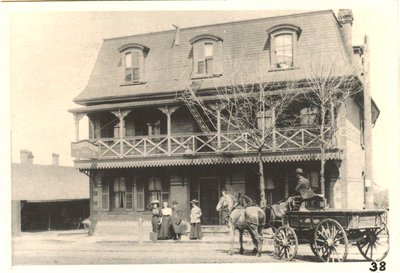