Media Type
Text
Item Type
Correspondence
Description
A letter written by Colonel Moodie to James Newton concerning rent of a room in a house.
Notes
In May 1833 James Newton was departing for Canada from Berwick-Upon-Tweed; Colonel Moodie was killed during Rebellion of 1837. Therefore, the letter was written between May 1833 and December 1837.
Date of Original
1833-1837
Dimensions
Width: 30.4 cm
Height: 18.3 cm

Sir, I have just been up at the House and upon considering the great want of room in it, I have concluded to have the north room divided in the same way as the north one; to have window streets[?] out to the east end or Gable, to have a passage with two doors from the Kitchen, and a door to each of the small closets that still thus be made.

I saw one of your men, and (back side) endeavoured to explain the thing to him. I am not just certain, but that the door of the south small apartment thus created, had not bother enter it from the Kitchen, with partly a glass door so as to light it in some degree. This we can see about, when I return, but in the meantime, get the two partitions up, and lathed and plastered with all possible speed, so that they may be sooner ready for the papering, and do oblige me by hurrying on all the operations about it, both you own and poor old Vandebourghs.

Believe me yours, etc. 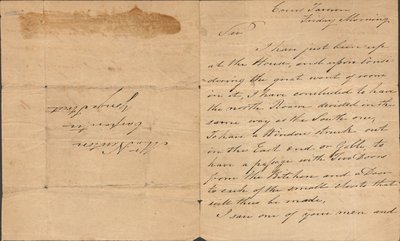