Media Type
Text
Item Type
Receipts
Description
An indenture indicating a purchase of a parcel of land in Vaughan by James Newton from Aaron Munshaw.
Notes
A part of the document was ripped off and didn't survive.
Date of Original
6 May 1837
Dimensions
Width: 24 cm
Height: 19 cm

Witnesseth: That the said Aaron Munshaw of lawful money of the said Province, to him in hand paid by the said James Newton... granted, bargained, sold, aliened, transferred, enfeoffed and confirmed, and by these Presents doth grant, bargain, ... Heirs and Assigns, forever, all and singular that certain Parcel or Tract of Land and Premises, situate, lying... aforesaid containing by admeasurement ONE acre be the same more a ... West of Yonge street in the Township of Vaughan aforesaid, and which [?] Parcel on the five between lots number fifty and fifty one at the distance of four chains from the degrees West two chains to a Port; then south seventy four degrees West five chains between lots number fifty and fifty one; then north seventy four degrees East five chains to...

Together with all Houses, Our-Houses, Woods and Waters, thereon erected, lying and being, and all and singular, the He... remainders, Rents, Issues and Profits thereof; and all the Estates, Right, Title, Interest, Claim, Property and demand whatsoever... of, in, to, or out of the same, and every part thereof. ... and to hold the same, with the appurtenances, freed and...

[?] His Majesty Justices of the [?] in and for the said district personally appeared the within named [?]

and being duly examined by us touching her consent to be barred of her Dower, of and in the Lands within described, she gave her consent thereto, and it did appear to us that such consent was free and voluntary, and not the effect of coercion, on the part of her husband or any other person.

GIVEN under our hands this sixth day of May in the year of our Lord one thousand eight hundred and thirty seven. 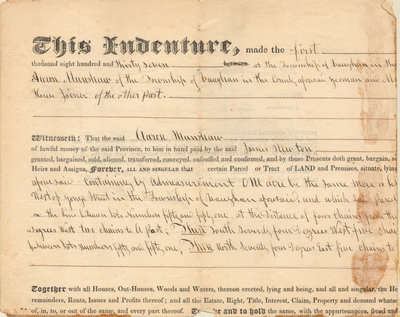