TOPOGRAPHY AND HISTORY OF COMMUNITY

Richmond Hill lies in the watershed of the Don River which rises in the hills in the northern part of Vaughan Township in York County. The east branch of the Don has its origin in many springs around Richmond Hill and towards Maple.

The surface of this part of the country displays a pattern of parallel ridges and hollows running in the general direction north west to south east. The valleys are U-shaped with flat floors.

The bed rock is covered to a depth of hundreds of feet by material deposited by the three glaciers which covered this.part of the country. The many large gravel and sand deposits are evidences of the glacial age. The rock formation is a sedimentary deposit of great age,and is called Dundas which is a type of shale, and produces the clay soil prevalent in the district.

To the North and West of Richmond Hill there is a stretch of Pontypool sand, about 1,000 acres. It is a brownish,sandy loam deposited by the glacier, and the top soil in many places is three feet deep. To the south of this between Richmond Hill and Maple is Brighton sand.It has more lime and is of a lighter color. Both areas were covered with mixed hardwood and evergreens. Both grow fine potatoes.

South from this we find Milliken sandy loam. This soil is a loam,with clay, silt, sand, small stones and boulders in its makeup. The top soil is crumbly, easy to work and of a dark, rich color. In this area lie the best farms of the district.

To the south of the David Dunlap Observatory, Lot 41,Markham, is a deposit of Colwood loam. This is a deep black top soil, and there are some market gardens in this area for which it is very suitable.

The first Indians of which anything is known were Senecas, who settled near Toronto around 1666 to protect their hunting grounds. They seem to have used the Humber and Rouge Rivers to travel to Lake Simcoe. About the year 1700 the Senecas gave way to the Mississaugas. Remains of an Indian camp-site have been found where the Don crosses Yofigehurst, below Richmond Hill,on Lot 43 Vaughan.

When the first white man came to Richmond Hill in 1794, there was an Indian grave just inside the present cemetery. It had a small hut above it made of cedar logs tapered to a peak. Mr. Stegman, a land surveyor who did much of the surveying between Lakes Ontario and Simcoe, employed about twenty Indians who had their camp around Elgin Mills. It is interesting to note that Mr.Leslie McNair who farms on Lot 25, Concession 2 Vaughan, west of Elgin Mills has a collection of Indian relics which he has found while cultivating the soil. The Indian name for the Don was Michinquakokonk. Governor Simcoe named it the Don after the river in England of that name.

The original forest covering in this area consisted of ріпе, beef, iron, wood, hickory, cedar, elm, ash, hard and soft maple, white and red oak, birch basswood, cherry and tamarac. The valley of the small stream that ran through Elgin Mills, and the east side of Richmond Hill was a cedar swamp. Around Church and Centre Sts. E. was said to be quite swampy. Early maps show a black ash swamp, from the foot of the hill, Lot 44 on the map to below lot 40. Many beautiful specimens of elm and maple still remain in the district. Trees interfering with land improvement,the forest was rapidly cleared, and as much of the timber was used locally several mills were erected to cut the lumber. There were also mills of a more specified nature, where things necessary to the settler were made, such as pails, handles, barrels, farm, machinery, pumps, baskets, sash and doors, shingles etc. were made.

Another product of the forest in early days was Potash. Mr. Abner Miles ran a large ashery on lot 45, Vaughan. He also bought and shipped potash to Montreal, the price ranging from $8 to $10 a barrel. In 1850 Vaughan was more than 50$ cleared, and Markham 35$. The mills fell into disuse from failing water power or vanishing timber.

Much of the timber was consumed as firewood,the early houses being heated by large fireplaces in each room. Only body wood was used then. By 1820 stoves came into use and they also consumed great quantities of firewood. A large amount was used for commercial purposes. Brick kilns were fired by wood. A large brick yard was at the corner of Richmond and Trench streets.

The bake shop behind the store at the corner of Yonge and Dufferin Sts., the Brewery in the hollow west of Trench St. where the water tower now stands, the five blacksmiths, and any place using a stationary engine, all helped to use up the fuel.

In Richmond Hill, Lot 46 was for many years known as the Wood Lot, where the owner allowed any one to cut fuel for their own use.

Wood was also used for corduroy roads, and these stretched below Richmond Hill and above. A plank road was built about 1850 from Elgin Mills east through Markham Township to the sixth concession and then south for four miles.

For early house building pine would seem to have been the usual kind of timber chosen, with oak being chosen for the door sills and steps.

Carriage building was developed to a fine art in Richmond Hill. About 1858 Wm. Trench 3rd, who with his father, Wm. Trench 2nd, had operated a blacksmith shop at Elgin Mills, opened a carriage factory on the South East corner of Yonge and Lome Sts. Rock elm, white ash, hickory and ironwood were woods used in this factory. This is where the stage coaches which ran on Yonge St. were built.

Panning mills were made st Richmond Hill, first at the Southwest corner of Richmond and Yonge Sts., later back near the waterworks. Patterson Bros., started their Agricultural Implement Factory on the site of the first Panning Mill Factory, moving later to Don Head, or as it was known then Patterson village, between concessions 2 and 3 Maple Road where they built a village which lasted until 1890,when the factory was moved to Woodstock, Ont.

Maple sugar and syrup were early cash crops, but as the forest vanished production dropped, although this is still carried on to some extent by descendants of pioneers in this district particularly by the Baker families.

The Don, like all rivers and creeks in Southern Ontario was subject to Spring and Fall floods. In 1855 the saw mill at German Mills was destroyed by flood. In 1850 on April 6th, many of the mills on the Don were washed away or so badly damaged that they were not rebuilt. On Sept. 13th, 1878 and again in 188I and 1885 there were serious floods, but by the latter date the remaining mills had converted to steam. Salmon used to come up the east branch of the Don as far as Thornhill, no records exist of catches above there. Any water in this area is not now sufficient to supply fishing except in planted ponds.

Woodland and field held a great many kinds of wild life in the early days Beaver, porcupine, timber wolves, black bears, marten, fisher, wolverine, otter, Canada lynx, wapiti and cougar all were present when the early settlers arrived, but have long since disappeared. Red fox, skunk and cottontail are increasing. The little cottontail rabbit is a newcomer to the district in the last 80 years (nearly 90 years when this was re-written in 1957). They were brought from England by the Cook family who were ardent hunters, and lived at the Carrville Mill farm. (As told by Mrs.Wm.Rumble to her family. Mrs. Rumble worked for the Cooks in the 1860's.)

The Jack rabbit was plentiful about 1935, but seems to have disappeared. In recent years deer have frequently been seen, as well as the occasional wolf.

More than 300 species of birds have been seen in the area. The passenger pigeon nested in the hills northwest of Richmond dill, but since 1884 none seem to have been seen. Pheasants have been introduced, and a short open season is allowed each year, butt no hunting is allowed in the first concession of either Markham or Vaughan.

There are no known mineral deposits of any sort in the area. Large sand and, gravel pits occur between concessions 3 and 4 Maple Road.

There are many springs in the area, and flowing wells are quite common. The water is quite hard and contains much calcium and iron. About 1930, a man drilling for water on Yongehurst Rd. struck a small pocket of gas which petered out after 9 months use.

The area around Richmond Hill may be termed Rural-Urban. There has developed gradually since World War I and more rapidly since War 2 subdividing of many farms into residential areas, but agriculture still has its place, and the farms of the district are largely devoted to the production of fluid milk for the Toronto market. 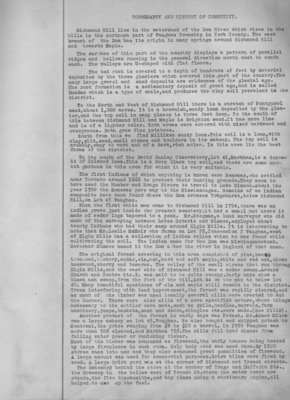