Important Incident of 1837 Rebellion
Main Menu → Previous Panel
David Bridgford's handkerchief
Panels
Historic houseAssembly at Montgomery’s HotelDeath of Robert MoodieDavid Bridgford's handkerchief
As soon as Moodie fell, Bridgford, who had a young horse, rode around the hotel, leaping the fences, and though fired at several times, succeeded in reaching Yonge Street on the south side of the tavern. On his way to the city he fell in with Powell, who was afterwards Mayor of Toronto. Powell and Bridgford were the first to reach Government House. His Excellency Sir Francis Bond Head, when aroused in the middle of the night was extremely credulous of the uprising, and said to Bridgford, “You country gentlemen are easily alarmed.”

“Easily alarmed or not,” replied Bridgford, “the rebels will be down on the town in two hours.” The governor then told them to order the bells to be rung. This was the first alarm given to the city of the impending danger.

In the arrangements for the defense, Col. Bridgford was commissioned by Col. Fitzgibbon to raise volunteers for immediate active service. Before starting on his mission it was agreed that if on his way he should get into any difficulty, Bridgford was to signal by displaying a silk handkerchief. This subsequently proved of service, for shortly afterwards he and his assistant, Mr. Perine Lawrence, were taken prisoners by the Mackenzie party near Montgomery’s. The Colonel, seeing a chance for his man, secretly handed him his papers and Lawrence made good his escape.

As soon as Bridgford was taken prisoner a consultation was held and it was decided to execute him as a spy. Mr. David Gibson, the well-known land surveyor, whose residence was burned by the Government forces, suggested that he be held as a prisoner of war became his security, and saved the Colonel’s life.

With several other prisoners, Bridgford was relegated to the ballroom of the Montgomery’s Hotel, and placed under a guard. Here he was interviewed by Mackenzie himself, who asked him the latest news. The Colonel replied that he (Mackenzie) ought to have it as he had stopped the mails. Mackenzie then said, “Do you know what is to be done with you ?”

“You are to be shot tomorrow at 12 o'clock; have you any request to make?”

Bridgford answered that he had but one, and that was that the execution be deferred until 2 o’clock.

"Why this delay?” asked MacKenzie.

“Because,” was the reply, “you will then have enough to do to look after your own life without attending to mine.”

When the troops from that city, led by McNab, Fitzgibbon and Jarvis, with art overwhelming force, appeared, the silk handkerchief was hung from the south window of the hotel, and the Loyalists fired their shot clear of the room where the prisoners were confined. The “Patriots” were unable to maintain their ground, a general stampede ensued, the hotel was burned and the seat of war transferred elsewhere.

The house whence the Colonels started, as well as the farm of 200 acres on which it stood, was owned by Colonel Moodie, who was a half-pay officer in the regular army, having been Lieutenant-Colonel in the 104th Regiment. He distinguished himself as an able officer in the Peninsular War, under the Duke of Wellington. He was also engaged in active service during the War of 1812. Like many of His fellow officers he had retired from military service in order to enjoy domestic comforts and farm life. 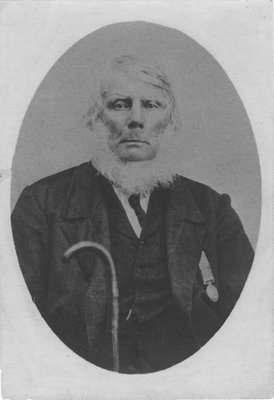