Methodist United Church
Main Menu → Previous Panel
New Church
Panels
Methodists in Richmond HillMinistersJohn SandersonNew Church
Links
Choir Picnic
The old Methodist church disappeared in 1879, when it was destroyed by fire, but there arose from its ashes a more noble and stately structure. This was built on the same siée of Yonge street but a little farther north.

The pastors at this time were Revs. Peter Addison and John Pickering.

The architect of the new church was Mr. Charles Walton of Toronto; the contractor, Mr. James Bums of Markdale. The spire was built and contract completed by Mr. John Harris, of our village.

The corner stones were laid on May 24th, 1880, by Mr. Warring Kennedy and Mrs. Peter Patterson. It was dedicated on March 20th, 1881, by Rev. John Potts D.D., the text on that occasion being Ephesians 3:8. In that year the total receipts were $1,659.13 according to a financial statement in the possession of Miss Gertrude Grant.

This edifice cost $17,000, the raising of which was not a light task but was accomplished by the member's self-sacrifice and determined loyalty to God and His Church. In 1910 the acetylene gas lighting plant was replaced by electricity, and the service of worship was materially helped in 1923, by the installation of a Casavant pipe organ costing over five thousand dollars.

The Methodist Church built in 1880. To the left in the picture, may be seen the window of the double house which was purchased by the United Church and demolished in 1956,to make way for the building of the Christian Education wing. This house was the home of the John Sanderson (south side) and Douglas Derry (north side) families in the 1890’s.

On June 10, 1925 when church union was established in Canada, a large number of Presbyterians joined with the Methodist congregation, and this church became "The Richmond Hill United Church”. 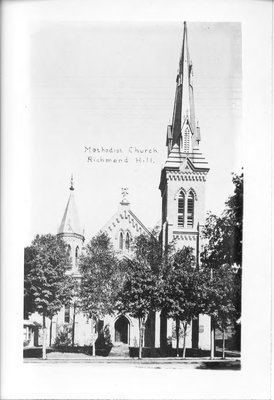