The old clock for over 30 years ticked away in first church. When the church was burned in Dec.1879, the clock was thrown into a snow bank, where it lay covered until the following spring. Mr. Sanderson purchased it, had it overhauled and built the cabinet. The works are believed to be very old.

The Sanderson name has long been connected with Methodism. Mr. C.H. Sanderson has in his possession a well preserved document, giving permission to one John Sanderson (a forebear of both these men) issued June 10th, 1806 in the reign of George III, to use his house "For religious worship by His Majesty’s Protestant dissenting subjects, commonly called Methodists. 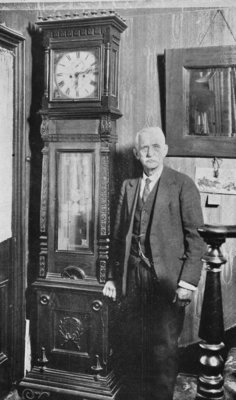