Richmond Hill Presbyterian Church
Main Menu → Previous Panel → Next Panel
Reverend James Dick
Panels
The beginningReverend William JenkinsReverend James DickNew building
Links
MinistersTreasurer's Report for 1872
In 1849, Rev. James Dick was called to Richmond Hill, and during his ministry the Presbyterian church in this area flourished exceedingly. Members' came from Thornhill and King township where there were many Scotch settlers, to Richmond Hill for Sunday service. In 1849 he organized Thornhill congregation, and in 1850 Laskay and Temperanceville. An average attendance of over 400 was reported from these four charges in 1850. According to the Blue Book of 1850, Richmond Hill "Stood well in the lead, both in numbers and finances of all the Presbyterian congregations in Upper Canada.” In 1861, the King congregations were separated from Richmond Hill, but Thornhill remained in close association until three years ago (which would be 1952.)

In 1860 coal oil lamps were furnished for lighting. In 1862 Alex Moodie was engaged as Precentor and in 1864 a platform and seats for a choir were built around the Precentor's desk. In 1869 the session declared "that organ music in a church tends to hinder and ultimately to silence the singing of the praise of God by the congregation, and so should not be sanctioned." But by 1877 the point of view had changed, and by a vote of the congregation, an organ was purchased. In 1881, the Session asked the members t to stand to sing and remain seated for prayer.

In 1884, the Session agreed to the introduction of hymns. Before this psalms alone were used. 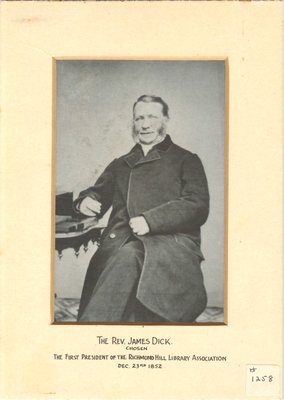