Richmond Hill Presbyterian Church
Main Menu → Previous Panel → Next Panel
Reverend William Jenkins
Panels
The beginningReverend William JenkinsReverend James DickNew building
Links
MinistersTreasurer's Report for 1872
In 1817, in answer to a call from two districts in York County, Richmond Hill and Scarborough, Reverend William Jenkins came from Scotland to minister to the needs of the people. He was a graduate of Edinburgh University and spoke twelve languages. His stipend was very small and he took up two hundred acres of land at Cashel on the sixth concession of Markham, where his family of eleven children raised no little part of their food.

Mr. Jenkins had a wide field of work, bounded on the north by Lake Simcoe on the east by Oshawa, and on the west by Oakville, while he did sometimes go as far as Hamilton, travelling for the most part on horseback over rough trails cut in the virgin forest. His first sermon in Richmond Hill was preached in a pine grove which covered the ground behind the present church his pulpit being a stump. Here also was held the first communion service to which came people of all creeds and denominations. The log building used as a Public School was generally used for church services. Mr. Jenkins served this congregation for 25 years until 1842 preaching on the Sunday before he died. After the service he pointed out to his Elders the spot in the cemetery he wished for himself. It is said he married some two thousand couples during his ministry being the only ordained minister in a large district.

There were only three other Presbyterian congregations in Upper Canada when Mr. Jenkins came, but through his efforts a great many were organized. As the village increased it became necessary to build a place for public worship. In the year 1821 a church was erected. Mr. James Miles offered to give the land, but neglected to sign the deeds. So in 1844 after his death this property had to be purchased from his heirs, John and Elizabeth Arnold for 300 pounds or $1,500. This church was also used by the Methodists on Sunday afternoons until 1846 when they built a place of worship. 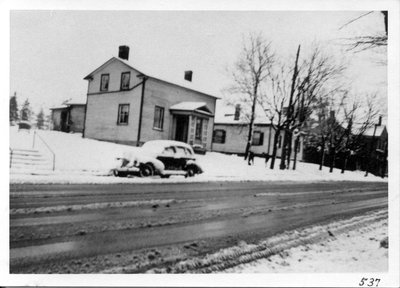 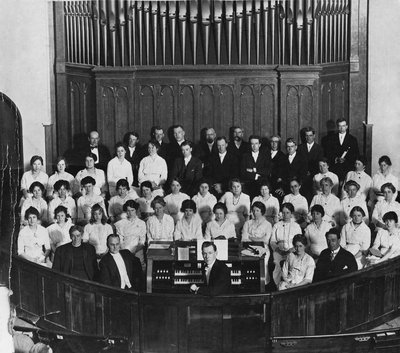