Biographical sketches of prominent residents of Richmond Hill
Main Menu → Previous Panel → Next Panel
Russell Lynett
Panels
Wright FamilyAmos WrightWilliam PowellSusannah MaxwellMatthew TeefyAlex J. HumeThomas McMahonWilliam TrenchDavid BoyleJohn CoulterThomas WilkieAbraham LawRobert MarshLeslie InnesWilliam HarrisonParker CrosbyJ. A. GreeneRussell LynettHelen and Frank HoggJerry Smith
Russell Lynett, pictured here, Richmond Hill’s Clerk and Treasurer, is “Mr. Know-it-all” to a lot of citizens, for to him come, in the course of his daily work, questions pertaining to nearly every phase of life in the village. It may be an inquiring reporter seeking information on local affairs to help write a story, an irate citizen with a complaint, or any of a thousand and one points, all are dealt with in the cheerful, human way that distinguishes “Curly”, as everyone knows him.

He is the fourth generation of Lynetts to be intimately associated with Richmond Hill and its affairs. He was born in the Hill, in the old house next to Craigie's store which has been torn down.

After attending the local public and High schools, he worked in the shipping room of the Bedford Park Floral Co. for sixteen years. In 1942, he became Village Clerk and Treasurer – the third in the Hill’s 75 years of incorporation.

During the time that he has been in municipal affairs, he has seen many changes. Over a third of the property in the village has changed hands in that period he says. At the end of 1941 just before he took office there were 505 local taxpayers. At the end of 1948 he had 680 bills to send out. This increase was just a small part of that which was to follow.

His has been an active participation in local affairs. It includes service as secretary of the public school Board for five years; 20 years on the board of the United Church, of which he was treasurer for 13 years; membership in the lions Club for 8 years, with two years as treasurer. Everyone knows of his keen interest in bowling. In his earlier days he played hockey and baseball, both at school and afterwards. He was one of those who played a prominent part in getting the present tennis court going.

All in all, Russell Lynett has played an important part in the steady development; of his home town. Now as population sweeps north ward, no doubt his service as clerk of a growing municipality, will do much to help make a bigger and better Richmond Hill. 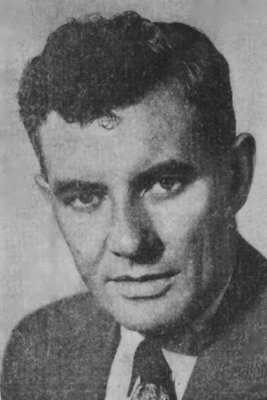