Biographical sketches of prominent residents of Richmond Hill
Main Menu → Next Panel
Wright Family
Panels
Wright FamilyAmos WrightWilliam PowellSusannah MaxwellMatthew TeefyAlex J. HumeThomas McMahonWilliam TrenchDavid BoyleJohn CoulterThomas WilkieAbraham LawRobert MarshLeslie InnesWilliam HarrisonParker CrosbyJ. A. GreeneRussell LynettHelen and Frank HoggJerry Smith
The ancestors of our local Wright family were among the earliest to emigrate from England to the British colonies, and among the first to come to Canada at the outbreak of the American revolution. Abraham Wright was born in New Haven, Vermont in 1786, and came as a child to Augustus, Ont. There his son, Amos Wright was born on May 24, 1809. In 1815 the family came to Richmond Hill, farming on Yonge Street.

Amos Wright entered public life in 1850, being elected first reeve of Markham township. In 1851 he was elected to the Canadian Parliament representing the riding of East York for 16 years. Later he represented West York for four years. Mr. Wright was the only member elected to Parliament from Richmond Hill until the election of our present member, Mr. J. E. Smith (who retired in 1957). In 1875 Mr. Wright moved to Port Arthur, where he was appointed Dominion Auditor with the Finance Department at Ottawa. He was also appointed Indian agent, Auditor of Public Expenditures, and License Commissioner. Before leaving Richmond Hill, he served as president of Mechanics Institute and the Agricultural Society. His home was at the end of Church Street north, now the residence of Mr. F. Dunlop. Mr. Wright has an interest in a mill south of the waterworks pond, on Mill Street, hence the name given Wright and Mill streets, led directly to the mill. 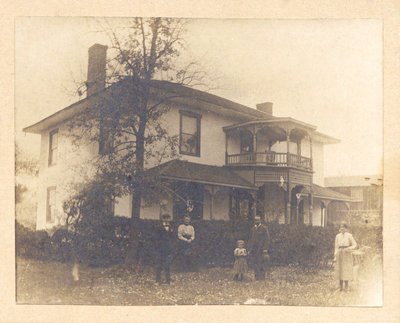