History of Yonge Street
Main Menu → Previous Panel → Next Panel
Public Transportation
Panels
Early developmentsPublic TransportationThe growth of Yonge StreetBuildings on Yonge Street
Until 1840 wagons were the common conveyance for passengers. The famous Сoncord type bus was designed for heavy service. The closed bodies were slung on high springs of leather and steel. This gave a swaying motion unpleasant to the Queasy stomach, but reduced the jolting and bumping. The usual load was eight or nine passengers inside, with none or two sitting with the driver. Omnibuses with lengthwise seats and a single door in the back, were used for the daily trip from Richmond Hill to the market place in York, starting the return trip at 4 p.m.

The first stage coaches on Yonge Street were operated by Geo. Playter and Son in 1828. Wm. Weller who operated a large line of coaches carrying “Her Majesty’s Mail” between large centres in Ontario, bought the line in 1832 and sold it in 1840 to Chas. Thompson. This line ran as far as Barrie, carrying mail as well as passengers. Two stage coaches a day left Toronto at 7 a.m. and 3 p.m. for Holland Landing, connecting with the steamer “Morning” on Lake Simcoe. Another coach connecting with the steamer "Beaver" left the Western Hotel daily at 7 a.m. but was discontinued in 1851.

In 1847, one Shuttle worth started a line of four horse coaches or omnibuses as far as Richmond Hill. These carried up to forty people, and were used by those wishing a trip to the country, in pleasant weather one could ride on top deck end view the scenery.

The time for the 25 mile journey from Lake Simcoe to Toronto was six or seven hours. The stage coaches were faster than the omnibuses, being smaller.

The slow rate of travel encouraged frequent stops for refreshment. Inns and taverns multiplied along Yonge Street, so that by 1850 there were some forty between Yorkville and Richmond Hill. In Richmond Hill Dolby's Tavern, later Dominion House; Queen's Hotel, later Palmer House; Robin Hood Hotel, were famous stopping places. Others mentioned in articles, of which no records remain are White Hart, Plough Inn, Half Way House, and Masonic Hall Hotel.

With the building of the Ontario, Simcoe and Huron Union Railway, later to be known as the Great Northern Railway in 1853, the coaches to Barrie and Holland Landing were discontinued. The line from Richmond Hill was continued in succession by John Palmer, Mr. Raymond, Wm. Cook of Yorkshire House, Thornhill, and from the early 1870's to 1896 by John Thompson of Richmond Hill.

The opening of the Metropolitan Radial Line to Jackson's Point ended the era of coaching on Yonge Street. 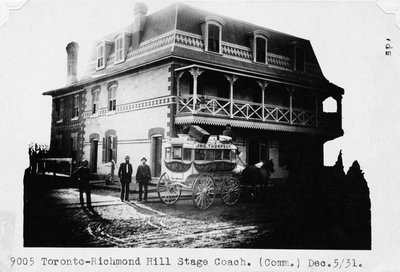 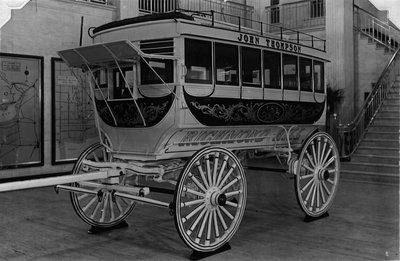 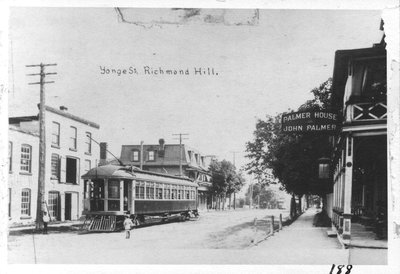 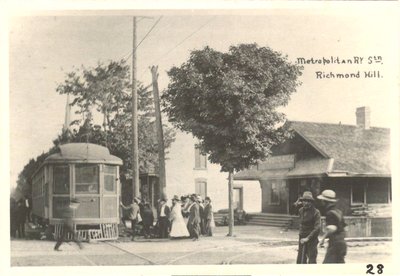