This is to let you know we are all about as well as usual, though I am not so well this winter as common. T is with difficulty that I can set to write. I am so weak across the […?] , our minds are generally comfortable. We have such immediate answers to prayer, our souls are on the mountain top often, and to be honest we feel as if the Lord had come according to his word to leave us no more, we have not particularly wanted for anything while you have been gone.

If you can, I should like to have you stop among the Wrights and see if they are building on the sand or on the rock. Christ Jesus

Elizabeth has been over two or three times, we expect […] Wright down shortly.

I have had it in my mind for years that I should […] same body go down that was capable among the Wrights reason on vital godliness.

We remain your affectionate parents Abraham and Elizabeth Wright until death, I was born in newheven near where Bennington battle was fought on my grandfather’s farm. I write this on my seventy third year. 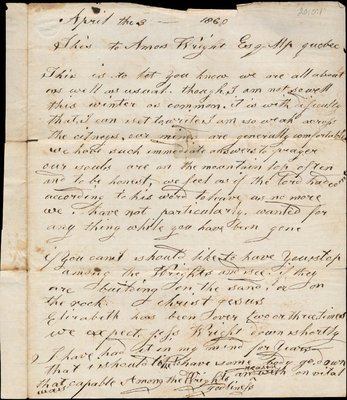