Media Type
Image
Item Type
Photographs
Description
A photograph of the aftermath of 1909 carbide gas explosion at the Palmer House.
Notes
This picture was taken following the explosion of the carbide gas works at the Palmer House Hotel. The explosion which occurred in the Spring of 1909 was quite an event which really rocked Richmond Hill. As may be seen the building housing the generating plant was completely demolished. It was located near the hotel stables at the corner of Yonge and Arnold Streets generated gas for lighting the Palmer House which was considered one of the district’s finest hostels. Some houses and the Methodist Church were also lighted by similar systems, but they went out of date rapidly when hydro became available in 1913.
At the left may be seen Mr. H.A. Nicholls, while Mr. David McKenzie who looked after the plant and narrowly escaped injury has his back to the camera. 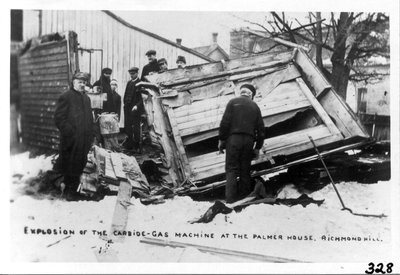